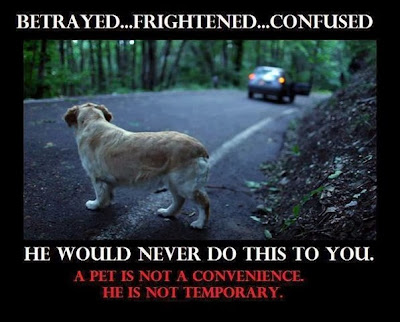 I cannot understand why or how some people can just leave their dogs beside a road somewhere and drive off.  It breaks me heart!  If they can no longer keep their dogs because of job loss, financial troubles, health issues--what have you--isn't it just about as easy to drop them at a pet shelter where the dogs would at least have a chance of being adopted by another loving family? 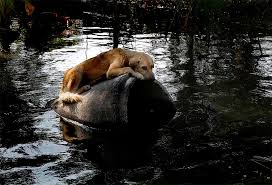 I find this action heartless, cruel, and selfish.  Such people should not even own pets in the first place if they are going to throw them away when things get tough.  Animals were created by God and are living creatures, and "man's best friend" deserves to be treated with respect and dignity, and especially taken care of.  So often, they give us far more than we ever give them.

When circumstances warrant giving up a beloved pet, do the best thing:  find a loving home for your dog or find a caring shelter.

Dogs deserve such better treatment from their humans.
Posted by Mavis Duke Hinton at 4:57:00 PM No comments:

Yes, Duke is the "culprit of the day."  Before we got a dachshund back in 2007, I had commented that I wanted a dog with personality.  Boy, did I get my wish! 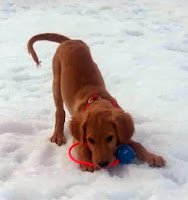 Every time he gets a bath--and I do mean EVERY SINGLE TIME--after I dry him off with a towel, he has running fits!  He zooms through the living room, down the hallway, around a chair in one of the guest rooms, and back out to where we are.  He then stares at one of us, waiting for us to "get" him, with his posterior up in the air, front paws down, the classic dog pose for playing.  If I stomp my foot, he's off again!  Does that for a few minutes, then settles down.


Beforehand, he hides when he hears me running his bath water.  How he knows that I'm gonna bathe him and not the fresh vegetables, I don't know.  He tolerates the bath fairly well; oh, he doesn't like it, but at least he'll stand still while I pour water over his back, soap him up, rinse him off, and repeat. 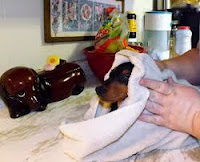 Once I begin letting the water out of the sink or tub, he starts wanting to get out.  I make him wait, of course, until I wrap him up in a large, soft towel and head to the living room.  I sit down on the couch with him in my lap as I finish drying him as much as possible.  When I let him down, he shakes himself as only a dog can do, rounding off the action with his wiggly tail.  How do they do that??  Then, he's off, having his running fits!

Do other dogs do this?  I'd love to hear from readers about their dogs' reaction to baths.  Leave a comment below. 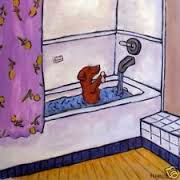 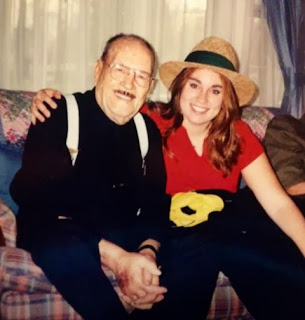 "Can't believe it's been 13 years today since my Papa Duke passed away. I loved him so much my heart could burst! He was one-of-a-kind. So thankful I was blessed to have this sweet, strong, hilarious, story-telling, musically-talented, superb chef, and best teddy bear ever as my grandpa. This is the first anniversary of his passing that my grandma is with him."

Yes, he's the same Papa Duke as the one in THE DACHSHUND ESCAPADES books, and much of the things I wrote about, he actually said and actually did.  He was the kind of person whom all dogs loved immediately, so to me, that's proof positive of the wonderful man he was.

HALL-O-WIENERS, OR WHY DOGS BITE!

Today we feature some doxie Halloween costumes.  Some look none too happy with their get-ups, don't you agree?  As the title of this post states, these might be some of the reasons why dogs bite humans, especially the final picture.  Poor thing! 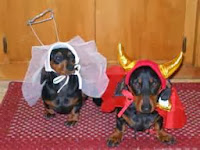 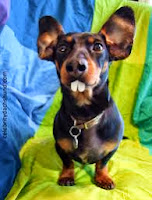 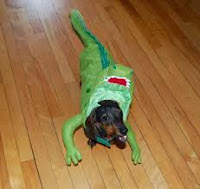 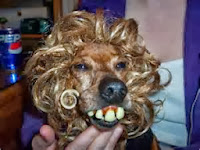 In the overall scheme of things, the pet peeve I want to discuss today probably won't rock anyone's world, but it just seems to be more prevalent (at least, to me)--and there is ABSOLUTELY no need for it at all!  The consensus is that people are getting more and more selfish these days, and I believe that this particular action is a case in point.
﻿


I've seen this pet peeve in action (having been on the receiving end) at churches, grocery stores, retail stores, sports arenas and stadiums, business meetings--anywhere there are aisles, hallways, or doorways.  And the offending ones are clueless that they are causing a problem!

If there is anyone left on this planet who has never encountered what am I talking about--ta da--here goes:  people blocking doorways, hallways, and aisles by just standing in the way to talk to someone else!  Yes, that's right;  preventing others from getting to where they need to go, then acting offended when someone says "Excuse me," when attempting to get past the clueless individual(s). I don't understand why anyone would stand in a doorway/hallway/aisle to talk before/after any of the places mentioned above, anyway.  DIDN'T YOU KNOW YOU WERE IN THE WAY, FOR HEAVEN'S SAKE?  Did you not see the door frame you were standing under?  Did you not have a clue that you were in an aisle or hallway too narrow for anyone else besides you and your cronies to pass by you??


Okay--rant over.  But I'd love to hear what readers out there have to say concerning this annoying problem.

It's no secret that fall is my favorite time of the year, so I've compiled a few pictures below to show why: 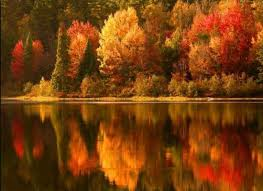 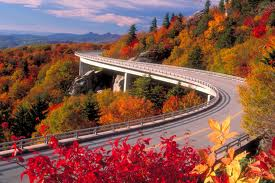 A few years ago, we (my publisher Oaktara and I) chose to change the dog's name in my books as well as my first book's title and series name.  Suffice it to say that an individual planned to sue if we didn't, saying he/she had placed a trademark on the name I had used.  Although my dog's name was not really under a trademark, we decided that years of court battles and hundreds of thousands of  dollars in costs were just not worth the battle, although we were not in the wrong.  My book would have been shelved during those years as well.  I've found that the individual in question has also gone after other authors and entities for that same reason, citing that he/she was planning a TV series using the dog's name that I (and they) had chosen.  That TV series, by the way, has never happened.


Yes, I know:  "it's about time."  My mother passed away in January at age 85, and then I had a bad fall in April from which I am still recovering.  Those are the two reasons I put Book 4, the final book of THE DACHSHUND ESCAPADES series, on hold for a time.

It was difficult for me to write about my mother after she passed away.  I needed some time to mourn, miss her, and reassess how I wanted to finish Book 4 without her.  After some time passed, I solved the problem by simply writing Sarge's final installment like all the family were still with us, then added "A Word from the Author" at the end explaining that she had left us.