GETTING READY FOR CHRISTMAS

I have always loved vintage Christmas paintings, pictures, decorations, and family gatherings: the fireplace crackling with a cheerful glow, snow softly falling outside, listening to Christmas music as I decorate the house, and the grandchildren helping me bake goodies for the holidays.

Family is the best gift every Christmas, and we should never take our loved ones for granted!

'TIS THE SEASON TO BE JOLLY!

I don't know how Thanksgiving flew past us, but it did! Well, in our family, we had three birthdays to celebrate in November, plus Thanksgiving. Also, our daughter and SIL left us to head back to AZ in their RV. We had a celebratory sendoff dinner for them as well. So, now we're already in the Christmas season, one of my favorite times of the year. This month, you're going to see lots of Christmas doxies, so buckle up and enjoy the view!

Merry Christmas, doxie lovers! I pray you will have a wonderful season and many blessings with your loved ones! 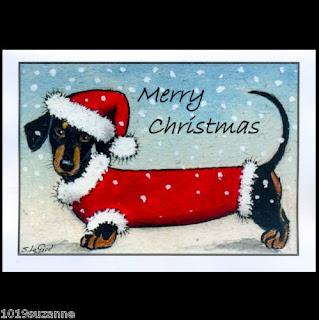 Have you ever wondered what dachshunds think about us humans?
❤️ A DACHSHUND’S MERRY-GO-ROUND LIFE was a labor of love for me, but also a bittersweet task as I completed this final book of Sarge’s tales about his zany family (which also happens to be my own family 😊). Sarge’s special doxie insights and his love for humans—in spite of their flaws—resonate with doxie lovers, because they already understand how clever dachshunds are! 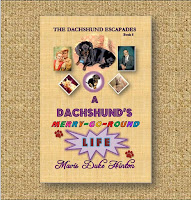 ❤️ The golden thread of unconditional love woven throughout Sarge’s stories encourages and uplifts readers as they smile at his comical antics. True to his breed, he is driven by his love for food, and his nose sometimes gets him into trouble.
❤️ Sarge’s colorful characters leap from the pages of his books, forever enshrined in this memoir. From his humans to the animals—Duke his doxie protégé, the six conniving cats (remember the Fuzz Brothers?), Gizmo the annoying cockatiel—all make his charming but unique family memorable.
❤️ Now a mature doxie, Sarge sees Mama, Daddy, and his three human siblings (growing so quickly) in a new light, because life is rushing by and he savors every moment. And, he entrusts his title of Grand Dawg to Duke, well trained by Sarge and ready for the task.
❤️ Notably, his beloved Papa Duke (my own late father) forever remains Sarge’s favorite human—in fact, since Papa understands Sarge so well, he bestows the title of “honorary dawg” upon Papa, a high compliment.
🌺 🌺 🌺 🌺 🌺
To learn more about this book and Sarge’s other heartwarming stories in THE DACHSHUND ESCAPADES series, click on the BOOKS tab above.

Wirehaired dachshunds are very different looking from their smooth and longhaired cousins. People who own them have said conflicting things about their personality: some say they're calmer than the other types, some say they're more hyper than the other types. Having never owned one myself, I can't clarify which is the most prevalent personality type of the wires. Therefore, I've checked out what one dachshund website has to say about the wirehaired: it gave seven traits, but the other five are pretty much the same for the smooth and longhaired, too:

Extroverts
There is a distinct difference in the personalities of the dachshund and the wirehaired breed. Wirehaireds are known to be more of an extroverted personality. They love to clown around and put on an act for their owner, but they can be a bit more headstrong than the original breed. This may mean that your dog will require a more firm form of training, but they won’t need more than a firm voice for correcting. They will listen and are trainable, so long as you are consistent and patient.
Typically bond to one person
Wirehaired dachshunds tend to bond to one member of the family, the one who they spend the most time with. They are friendly, for the most part, to all family members, but the one who is the main caregiver, socializer with the dog, will be the one he clings to. They want to be involved in what the family, especially primary caregiver, does and be a part of the action. They are also friendly with children and can make great pets for families with kids, granted, they are socialized early on from puppyhood, to be around kids. Of course, it is never a good idea to leave a child alone with any breed of dog, and this includes the wirehaired dachshund.
If you wish to check out the entire article, go to this link: https://puppytoob.com/dog-breeds/seven-things-didnt-know-wire-haired-dachshund/

Well, well, well . . . it's Monday again. Do you realize that one seventh of your life is spent on Mondays??

So . . . we might as well make the most of it, right? I'm thankful the Lord saw fit to wake me up this morning and continue my life. I have so much to be thankful for that it would fill volumes! I'm sure you can think of many things for which you are thankful, too. As the Thanksgiving season approaches (my favorite holiday, by the way), I plan to focus more on my blessings rather than those big and little annoyances in life. What about you?

In any case, here are some Monday dachshund memes to brighten your day:

It's impossible to NOT love dachshunds!!

WELL, WHO DIDN'T KNOW THAT??

Aren't these the cutest pups for your Monday? Some look like chocolate chip cookie dough, some have more dramatic coloring, but ALL are C-U-T-E!

WHAT TIME IS IT?? TIME TO SEE THESE DOXIE CLOCKS!

First things first: don't forget to turn your clocks back one hour this Sunday, Nov. 4 as we return to regular time.

Since we're talking about time, I did some searching on the web, and there are tons of doxie clocks out there. I'm going to share a few of them with you, but these don't even scratch the surface of all those clocks for doxie lovers. Here ya go:

Have a great weekend, doxie lovers! And don't forget to set your clocks.
Posted by Mavis Duke Hinton at 7:00:00 AM 1 comment:

Yes, one of my favorite months of the year has finally arrived! Our family celebrates three birthdays this month, as well as my favorite holiday, Thanksgiving. We have so many blessings to be thankful for, and I'm sure you do as well. 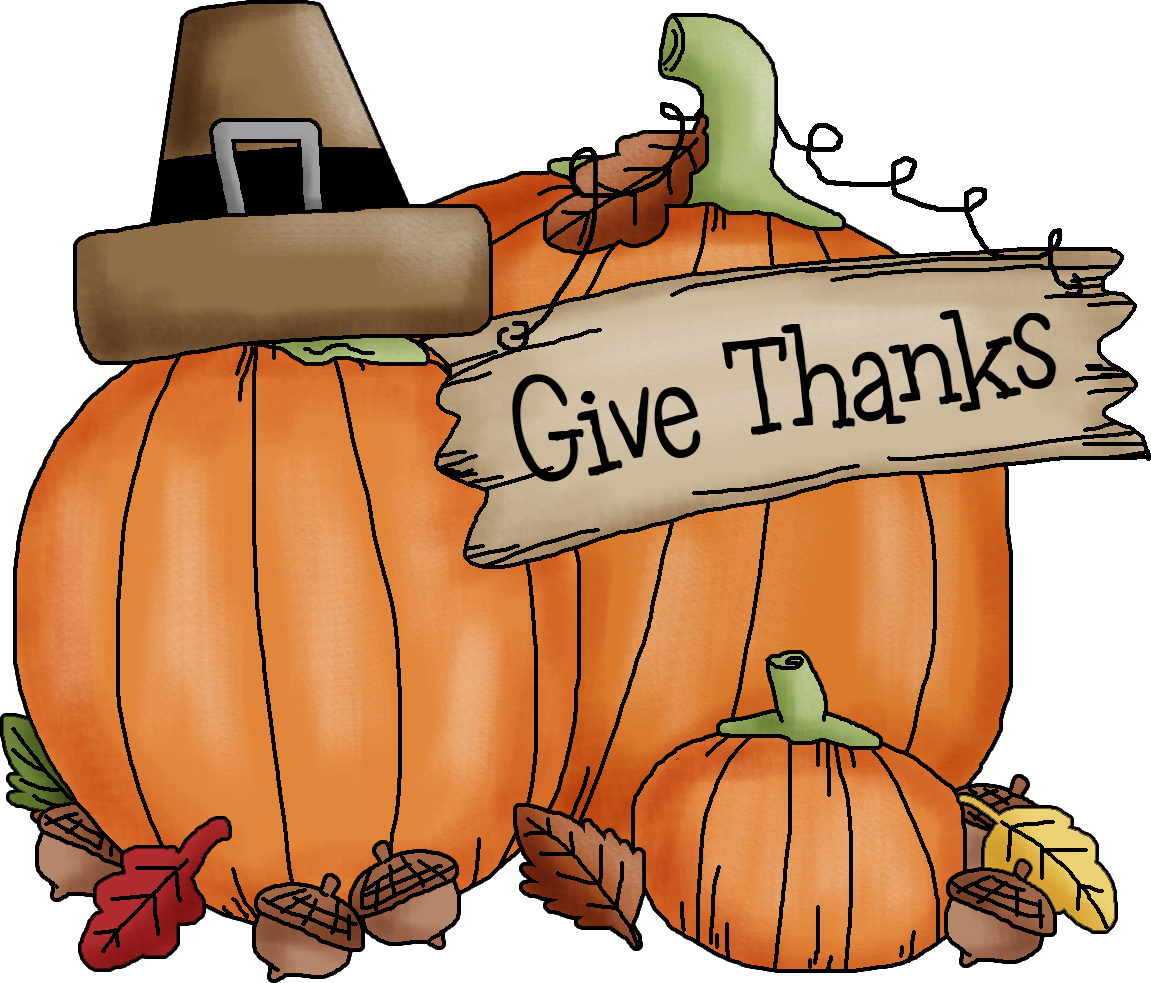 Doxie lovers never miss an opportunity to dress up their dawgs, even for Thanksgiving, so here are a few cuties to launch the Thanksgiving season for you: 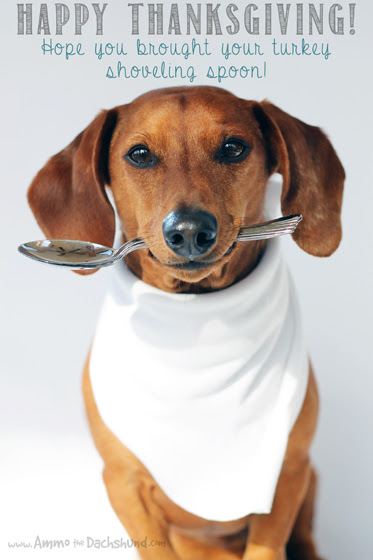 Get ready to work those Thanksgiving dinner recipes, too. In our family, the Thanksgiving meal is our favorite!
Posted by Mavis Duke Hinton at 7:00:00 AM 1 comment: