I AM SARGE 99 CENTS FOR A LIMITED TIME

This young doxie apparently has a busy weekend planned for himself. We're just going to stay around the house and get some work done inside and in the yard. Clark will putter around in his shop as he prepares to build a swing set for some friends. I'll cook, do housework, and work on my latest book, hopefully to be published by June.

I AM SARGE, Book 1 of THE DACHSHUND ESCAPADES, is currently listed for 99 cents in the Kindle Store! Get your copy today:
www.amazon.com/dp/BOOUNQSSDM

If you prefer paperback, you can find out more here:
www.createspace.com/5295537

What about you? Anything exciting planned? Have a great weekend, doxie lovers.
Posted by Mavis Duke Hinton at 10:59:00 AM No comments:

Email ThisBlogThis!Share to TwitterShare to FacebookShare to Pinterest
Labels: dachshund, dog, doxie, I Am Sarge, THE DACHSHUND ESCAPADES, weekends

Remember the rubber ducky song on the Sesame Street TV show?  If I recall from when our girls were little, it was either Bert or Ernie who sang it.

This doxie seems to be enjoying his bath outdoors, but many dachshunds HATE their baths--my Duke is one of them.  He'll go hide when he hears me run his bath water in the sink. I don't know how he differentiates between his bath water and vegetable water (I wash veggies before cooking them), but he does.  Sometimes he's just too smart for his own good.

What about your dachshund? 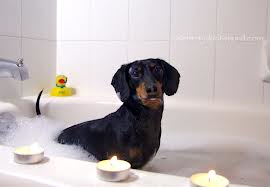 Hello!
Trevor here. I'm Sarge the dachshund's agent, so please allow me to clue you in: THE DACHSHUND ESCAPADES books by Sarge the doxie author aren't just for dachshunds, Dahling!

Humans of all ages adore Sarge's tales about his zany human family. And oh, some of the predicaments my boy gets himself into! Not only are his humans outrageous, their other animals--conniving cats, Shadow the doxie, a talklng cockatiel--will entertain you to no end! You simply must learn more about these books, my friends.

Have I intrigued you yet? Find out more at www.amazon.com/author/mavisdukehinton Man, if that isn't the truth, then I don't know what is--and I can speak from experience, too. My doxie Duke is bossy at times when we don't do what he wants us to do.

Case in point:
He wants us to play "sock" with him, and either we're busy or too tired or whatever. Now, if you aren't familiar with the game of "sock," I'll clue you in: victim (meaning me) puts an old sock on one hand and lets the dachshund attack it. No, I'm not kidding! I've learned to put TWO socks on my hand, because Duke likes to attack "it" with gusto. Oh, when he realizes that it's actually my live hand (at least, for now) under that sock, he won't bite down, but he sometimes gets carried away and chomps--but thankfully, not too often.

The "sock" sneaks up on Duke and attacks, and he growls at it and tries to get it. He rolls over on his back and growls. He puts his head down, staring it down, growling. And he creeps up on it and pounces. All of this, mind you, is usually taking place in my poor lap, so I usually have a throw blanket on there for cushioning from those doxie paws.

Why do I inflict this upon myself, you ask? Because Duke loves the game of sock so much, that's why! And I'm a sucker for those begging doxie eyes and limp ears when he wants to play with me. After all, I feel honored that he chooses me to be his playmate. I know--what a sap I am!

Clark also plays sock with Duke, but Clark is smarter: he sits on the couch and lets Duke do his pouncing, attacking, and jumping ON THE COUCH instead of his lap. But I always sit in my electric recline, because I got in that habit when my knees were back and then after my two knee replacement surgeries. Now, that's the only place I will sit in our living room. So, doxies aren't the only ones who are stubborn!

My granddawg Shadow (in his younger days) loved to chase the ball. He'd play fetch with a hapless human until said human's shoulder was practically dislocated (Clark knows this from personal experience, too). Shadow never tired of that game, either.

Duke is now nearly nine years old (his birthday is in June), but you'd never know it except for some gray where his tan fur is. He's still a puppy at heart, loves life, loves to get laughs, and his favorite thing is playing sock. Who am I to deny him? 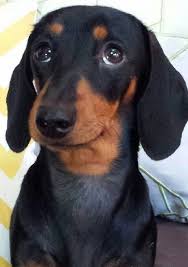 DOXIE LOVERS,
My new book is in the works, and although I'm still writing, editing, and formatting, it's shaping up!
The title has changed several times, so I'll keep it under wraps for now until I have it finalized. As always, it will definitely have the word DACHSHUND in it! As always, the word DACHSHUND will be in it!

It's a different style from my previous books, so stay tuned . . . more details will be forthcoming soon.

Ain't it the truth!!

"Please let me back in! I've only wanted in
and out a dozen times this afternoon!"

HOW TO EAT AROUND A DACHSHUND

There's much truth to that statement; in fact, I'd like to add to it: I've learned to eat just about everything more quietly since we got Duke, but it usually doesn't work.

He can be dead asleep under his blanket on the couch, but if I tiptoe into the kitchen and get out a slice of cheese, he's there underfoot before I know it. He has a lot of favorite foods, actually, so with the exception of those foods we can't give him (like grapes, tomatoes, onions, and so on), he's game for just about anything else. Oh, he doesn't like lettuce, but he likes yogurt (except for the banana flavor.). He doesn't really like bananas very much, either.

Dachshunds, a.k.a. chow hounds extraordinaire, have such good noses that I can only imagine how much better food smells to them than it does to us humans. I made spaghetti sauce in the crock pot this week, and after an hour or so, it really started smelling wonderful. To a dog, each ingredient is smelled separately, so my chow hound knew exactly what was in my sauce, even if he didn't know the name of each item: ground beef, onions, Italian seasoning, garlic, diced tomatoes, undiluted tomato soup (takes away some of the sour taste) and Classico garlic and basil sauce as the base. Oh, it was great after slow cooking for five hours. Along with our tossed salad and garlic bread, it was a delicious meal.

Duke loves to eat the pasta by itself--we used angel hair--and he acts like it is delicious!  As you know, pasta alone has very little taste, but I suppose he likes the unusual shape of it. We give him a small bowl with some angel hair, and he's so happy.

WE COULD LEARN FROM DACHSHUNDS

Sometimes it's just downright hard to be cheerful, isn't it? One thing about dogs: they are ALWAYS thrilled to see us, and for that, I am eternally thankful.  If I am having a bad day, my doxie Duke knows it and comes to comfort me.

Of course, my wonderful hubby always takes first place in my life, but Duke is right up there, too. He instinctively knows when either of us doesn't feel well, so he jumps up in the appropriate lap to offer his comfort of a doggie kiss or snuggle. It's hard to feel sick when a warm doxie offers his love.

Nothing compares to the greeting one receives upon returning home from a trip, be it for five minutes, five hours, or five days! Dogs really know how to make us feel welcome, loved, and important, all at the same time.

Dachshunds . . . you gotta love 'em (because they love you all the time). 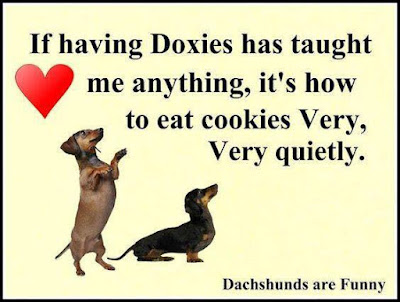 In our house, any food is fair game when Duke is around! We've learned to spell any food-related word because Duke knows what it is and perks right up: food, kitchen, cooking, breakfast-lunch-dinner, eat, cheese, etc.

See the doxie in the meme standing on his hind legs? Duke does that when we are sitting at the table to eat a meal, and we call it his "circus dog impression." He is short, so he thinks if he stands like that, he'll be able to see what's on our plates!

How about your doxie? 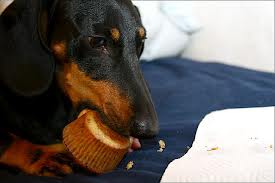