Daughter Bethany arrived from Phoenix safely yesterday, and after dinner she and her dad went to the grocery store to pick up some items she plans to cook for us.  Hooray!  I might also add that they bought two FAMILY-size bags of breaded okra, too.

Last night around ten o'clock, she announced, "I need a snack.  Gonna fry me some okra!"  Well, who is to say what time one is supposed to fry or eat okra, right?  So here is a photo of Bethany doing just that: 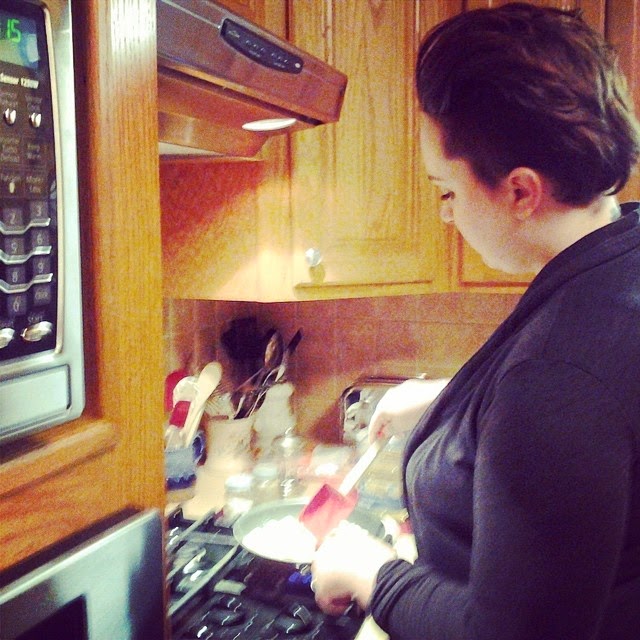 She really enjoyed it, too, murmuring "mmmmmmm" and "yum" between bites.

I so love watching someone enjoying good food, and in the South, fried okra is definitely good food! 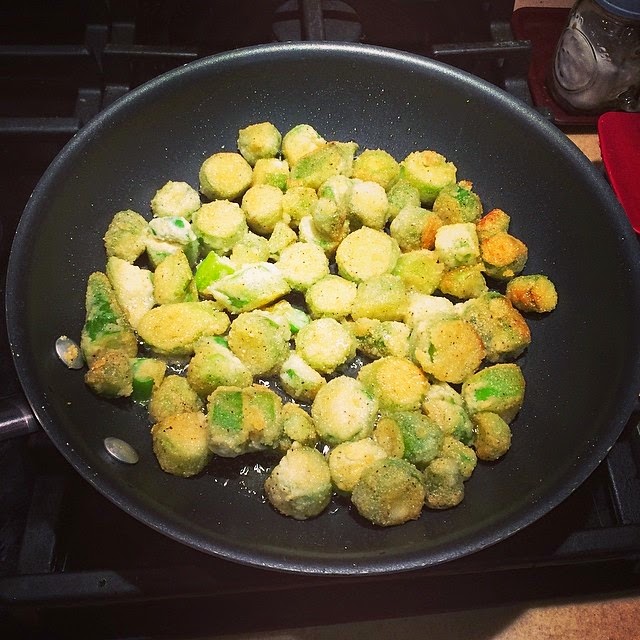 Our youngest daughter Bethany is flying in from Phoenix today to be with us for ten days before, during, and after my knee surgery.  We last saw her and hubby Kurt at Christmas, so we are really looking forward to having her with us.  Holly and her family are also thrilled to have her sister visiting.


One thing Bethany requested:  FRIED OKRA!  A true Southern dish, she always wants a lot of it when she visits, and she even heats it up in the microwave for snacks :). 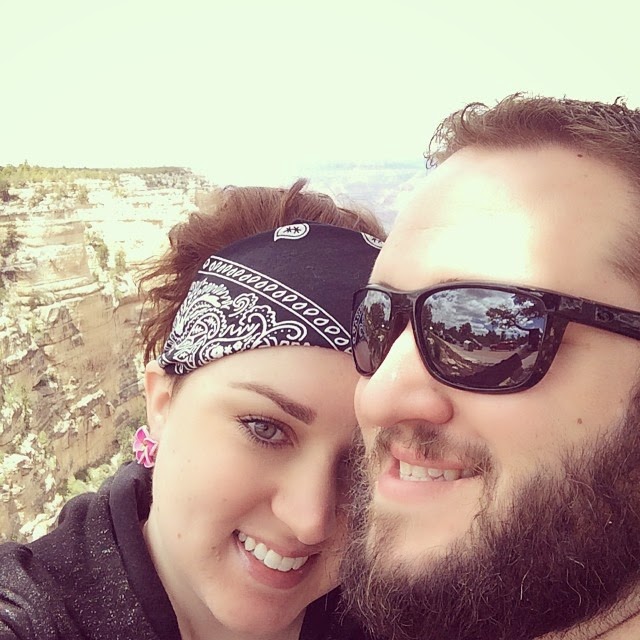 A trained chef, we are looking forward to having Bethany cook for us!  She's also vegan, and we promised to eat "her" food with gusto.  Anything she's made that's vegan is very tasty and good--and I've requested her special homemade guacamole dip.  It's chunky, flavorful, and I could make a meal out of it with tortilla chips. 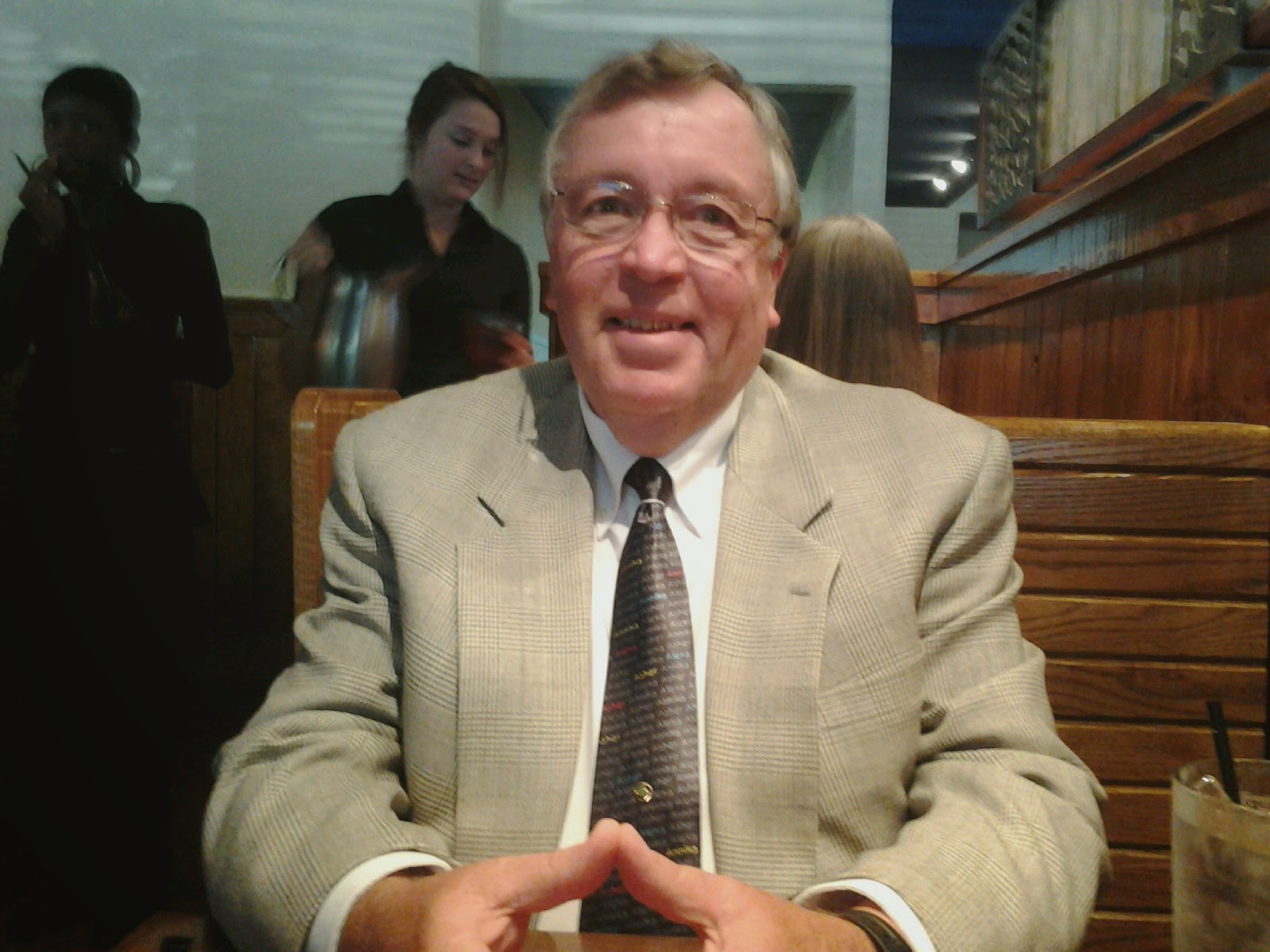 In any case, we appreciate our daughters--Holly came for my last surgery and made us several casseroles for the freezer so Clark could have a break.  Our church life group also sent cards, called, visited, and provided meals for us.  So thankful for my many blessings!

Clark cooked, cleaned, did laundry, and did practically everything for me until I could do for myself.  What a wonderful man he is!

I don't look forward to the surgery or to the pain afterward, but I do look forward to being stronger and walking better than I have in years.  My family is the best, and I am so thankful for each one of them. 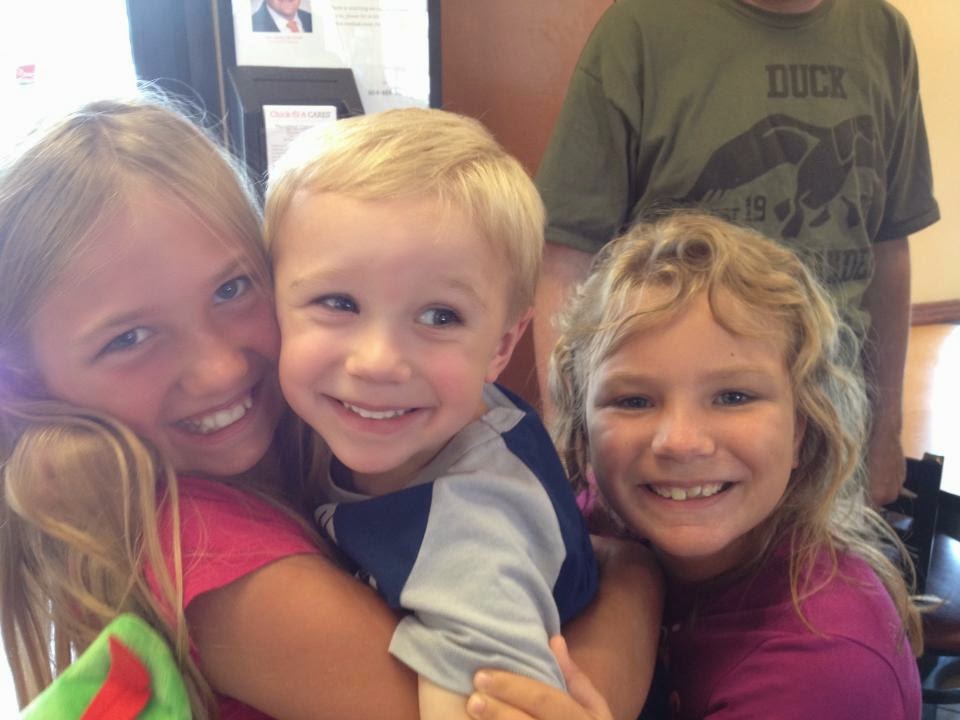 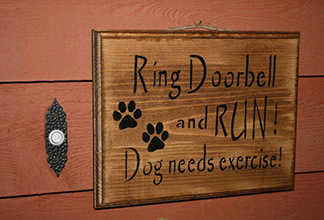 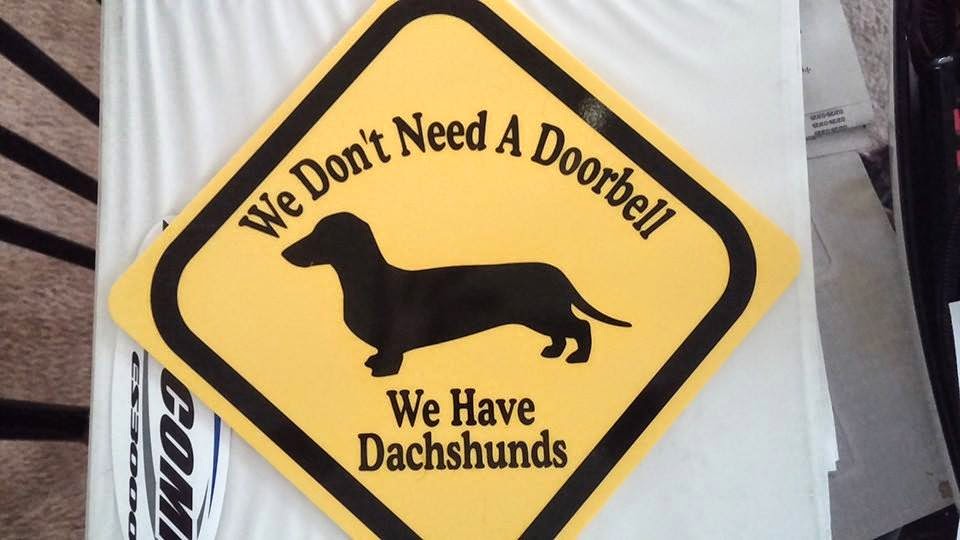 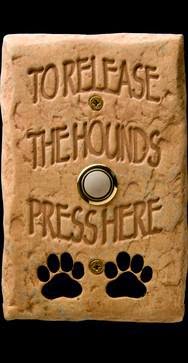 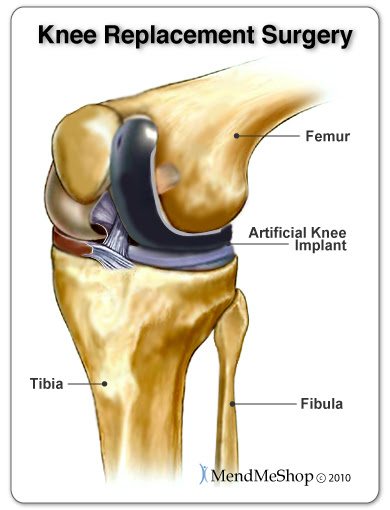 I may or may not post again before my second knee replacement surgery next Tuesday, May 20.

Soooooo, if you notice that I haven't updated the blog for a few weeks, you'll understand.

We don't have a laptop for home use since we've never really needed it.  After my first knee surgery, however, I could not sit at the computer desk for quite awhile because my leg would swell when I left it down.  Thank heavens for my comfy recliner!

We may get that laptop one of these days, but it's not a big deal.

I just ask for prayers regarding my surgery and recovery . . . and for my hubby Clark and our two daughters Holly and Bethany, who will be my "servants" during my recovery period.

And for Duke, too, of course! 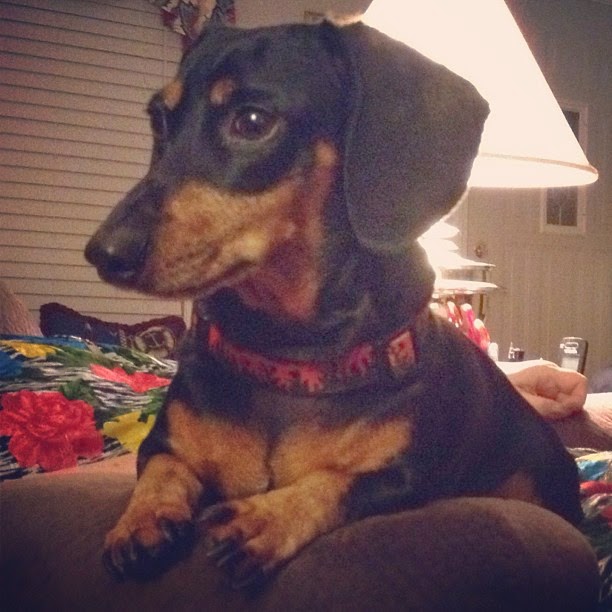 
My mother passed away on January 8, 2013, so she is celebrating her second Mother's Day in heaven this year.  We all miss her greatly, but we wouldn't wish her to leave her beautiful mansion in heaven just to see us again.  For as she told me before she left, "Don't worry about me.  I will be in heaven waiting for you."

The photos below are from various stages of her life; Dad was in the Army, so we lived a lot of places as I was growing up.  It was a fantastic life, and Mom took it all in stride--no mean feat: 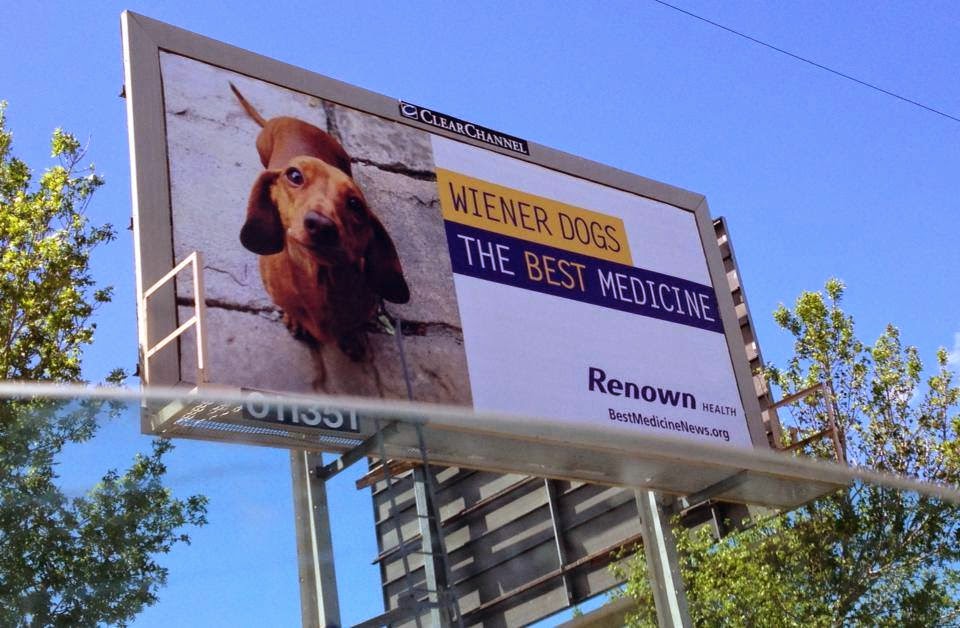 I love this billboard because it is so true!  Everyone I know who owns a dachshund loves it tremendously.  And doxies are noted for loyalty, comedy, stubbornness, and unconditional love for humans.

Suffice it to say that they put up with us rather well! 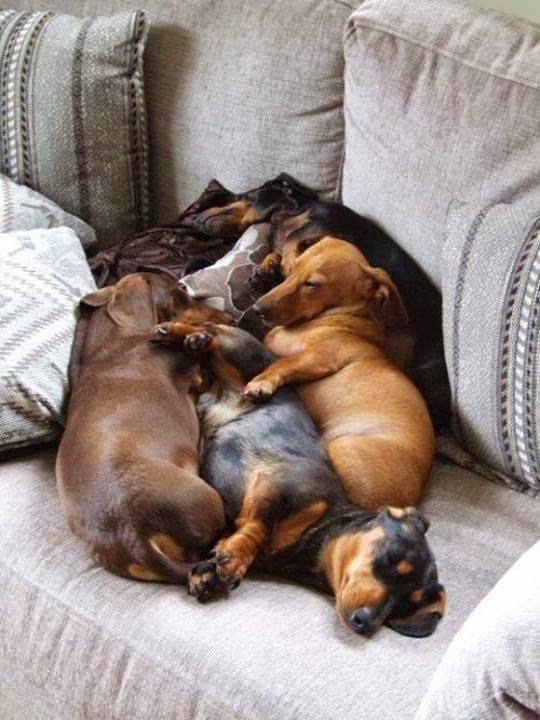 BEING A GRANDMA: IT'S NOT ABOUT KNITTING ANYMORE 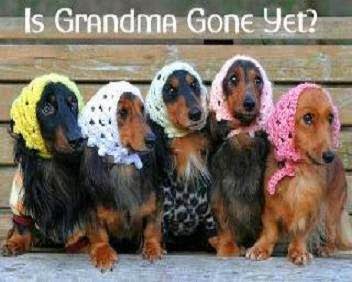 Here's at least one grandma who no longer knits, crochets, or embroiders!  I actually did those things IN MY TWENTIES . . . but can't muster up enough interest in doing so now.  I've moved on, so to speak.

Oh, there's absolutely nothing wrong with those things . . . if it is something you enjoy.  It's just that I no longer enjoy doing any of them.  I like to read, write, play with my doxie, and spend time with family and friends, especially the grands.  After my next knee replacement surgery (on May 20), and I've completely healed, I'm going to dive in head first and do some serious writing.  My first knee replacement is doing well, but that's not to say that all my stamina is back yet.

We found a baby blanket I had crocheted for our youngest daughter Bethany when she was a baby.  I used the shell stitch and the colors of light blue and yellow.  She no longer needs it, obviously, and neither do we (even more obviously), but I just cannot part with it.  After all, it took me hours to make that blanket, and it means a lot to me--precious memories, for one thing.

Being a grandma these days is so much more than sitting in a rocking chair with a shawl around my shoulders, knitting or crocheting away.  It also means spending time with and loving those grandchildren--and I especially enjoy being silly with them.  The time will come all too soon that they might think I just act too silly for them.

I suppose I'll have to grow up then . . . but for now, I'll keep doing silly things that they enjoy:

* "Where's Grandma?" I play this with Asher - I hide my face behind my hands, and when he
opens them, I make a silly face.  He laughs every single time, and I love it.  Who wouldn't?

* Giving a silly running commentary about a commercial on TV, putting my own spin on it.

* Looking at a woman's magazine and making up outrageous stories to go with the pictures of makeup, food, housewares--what have you.

* Dressing up in an outlandish costume and making up a play with the granddaughters as we go along.

* Pretending to be one of Asher's superhero toys - he and I each pretend to be a superhero (Batman, Superman, Captain America, etc,.), and using the toy, we interact with each other.  That boy has quite an imagination for a four year old!

* Playing card games such as "War" or "Uno"  with Annika and Alexa.  I always say I'm going to win, but I often don't, much to their delight.

* Drawing silly pictures for Asher, all the while saying he won't be able to guess what I'm drawing.  Of course he does, and I feign disappointment that he can figure out what I drew.  He loves that! 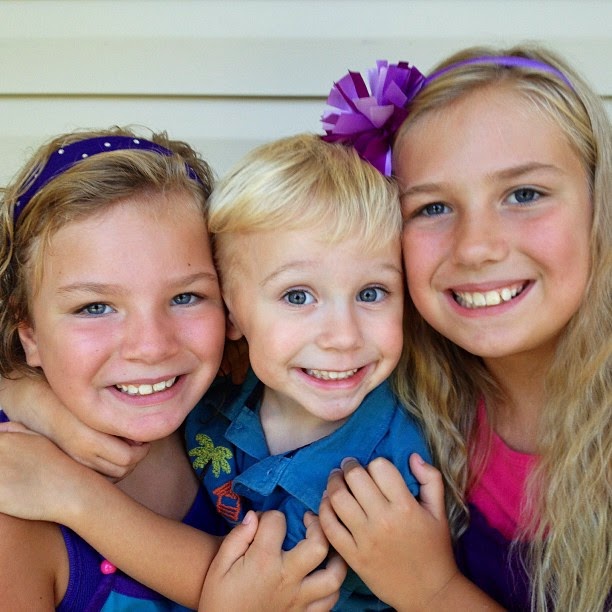 * "Make up a story" - I'll start out with a sentence:  "Once upon a time, a little girl was playing in her room and heard a loud noise . . ."  Each child in turn adds an outrageous sentence to our story until we all dissolve in giggles.  This game is especially good while riding in the car from their house to ours, which takes about an hour and fifteen minutes.  Some of those outlandish stories still make me smile as I type this!

Well, you get the idea!  Grandchildren just want our TIME and ATTENTION.  I can't romp and play with them for now, of course, but we can be together and I can show them I love them.

That's what being a grandma is all about.
Posted by Mavis Duke Hinton at 12:44:00 PM No comments:

this one is no exception!

I'm told that dog owners should brush their dogs' teeth regularly.  Well, what if my dog (in this case, Duke the doxie), won't sit still and open his mouth willingly for me to do so?

When we took him to the vet recently for shots and a pedi, she examined his teeth and said they were fine; he'd need them cleaned in a year or so.  I suppose his enjoyment of chewing on his old blanket helps keep the plaque off his toofies.

How does your doxie tolerate tooth brushing?