Today is our dachshund Duke's sixth birthday!  Our home has never been the same since we brought him home as a scared little eight-week-old puppy.  It didn't take him long, however, to make himself at home in our house as well as in our hearts.  He's sweet, loyal, LOUD (typical dachshund), funny . . . oh yeah, and evil, too:  when he gets his squeak toy, he keeps it about one inch out of my reach, all the while looking at me with a devilish gleam in his eye, growling.  I declare that dawg looks like he's grinning at me :).

Here are some pics from the day we saw him at the doxie farm to how he looks now: 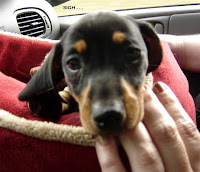 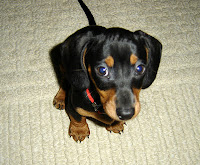 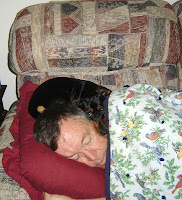 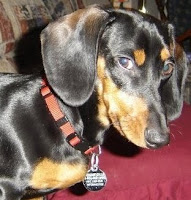 Today's post is not about dachshunds, but about grammar and usage.  As an English teacher, these errors are some that drive me crazy.  So, here ya go:  print it out and tape it to your computer screen.  Voila!  Instant grammar (or at least it's a start :).﻿ 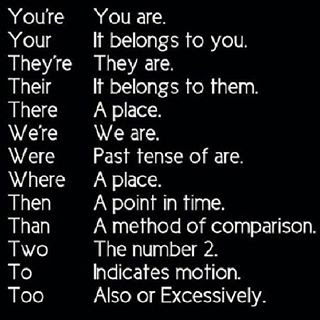 I'm a softie when it comes to puppies, and when I see them sleeping, I'm a goner.  These pics just make my heart melt!  They are just so cute, sweet, and darling.

Now that I've made you nauseated, take a gander at 'em: 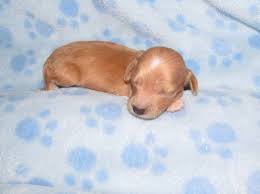 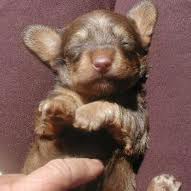 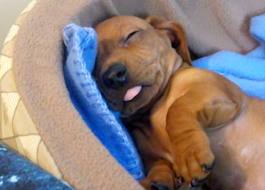 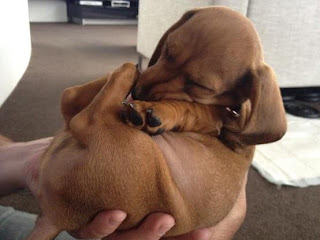 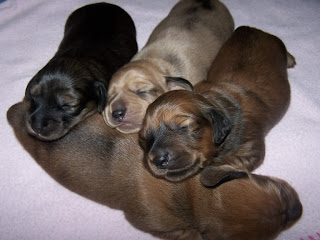 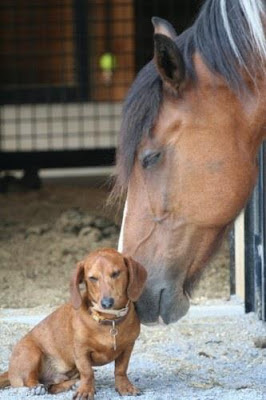 Time for another caption photo:  I love this one!  Add your caption in the comment section below.
Posted by Mavis Duke Hinton at 10:01:00 AM No comments: 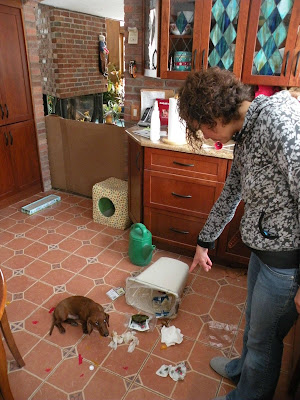 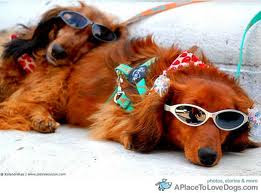 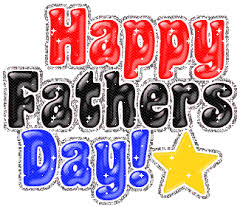 Here's wishing all you dads out there a wonderful Father's Day.  Oh, I know dads don't get the attention that moms do on Mother's Day . . . but that doesn't mean we don't love and honor you just as much.

Two men have made my life so much better than it would have ever been without them:  Dad (now in heaven) and my husband Clark.  Dad was a fun-loving, gregarious sort of man who went all out with things that he loved:  cooking, gardening, music (he learned to play the guitar by ear as a young man), laughing, telling his funny stories, etc.  And he loved his family very much.  I sure do miss him! 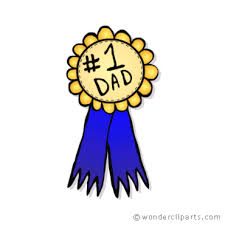 Clark is a wonderful husband, father, and grandfather.  Always selfless and doing for others, he's a very special human being, even if he won't acknowledge it :).  We all know how talented and loving he is!  I know he's saved our family thousands of dollars over the years with his handyman skills:  repairing, installing, updating, creating, and improving things around our homes and working on vehicles.  He never brings attention to himself (unlike moi), so it's up to me to tell the world that he is so wonderful.

Thank you, Lord, for bringing this man into my life. 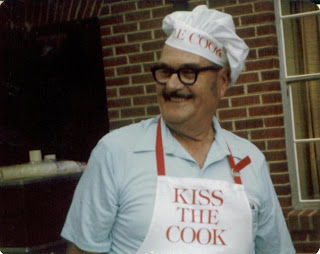 My late dad, Robert Duke, who loved
being a chef 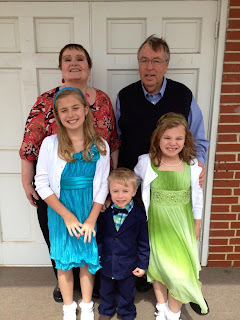 Clark and me
with the grandkids 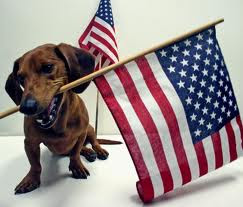 I am unabashedly patriotic:  I love the red, white, and blue, the flag, the national anthem, our military, and what we stand for.  The flag is the emblem/symbol of what our country stands for.
So . . . Happy Flag Day, everyone!  "Long may it wave."﻿
Posted by Mavis Duke Hinton at 10:35:00 AM No comments:

YES, I WAS A POLICE OFFICER 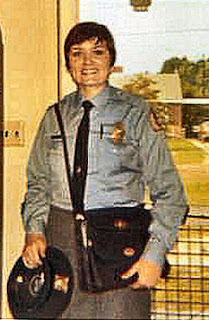 The young woman in the picture above was 24 years old--a lifetime ago :).  I graduated from the Raleigh, NC, Police Academy, one of only two women in the class.  Somewhere I have a photo of all of us, lined up in our caps and uniforms; if I find it, I will post it later.  The graduation was on local TV stations, because back in the day it was an unusual career choice for women.

In the academy, we had classroom training, which involved knowing the laws and ordinances, we had experts come in and share their knowledge with us, and yes, we had to take and pass tests!  I had the highest academic average of our class, a distinction that I'm sure nobody else recalls all these years later. 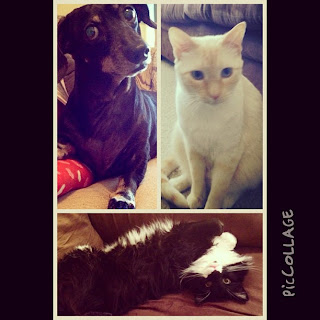 This collage is of our granddawg Shadow with two of our grandkitties Aslan and Piper.
Aren't they adorable?

Shadow loves both of them, and they love him, too.  In fact, Aslan gives him a cat bath every night.

They each have their own distinctive personalities, too.  Shadow is 100% dachshund, and although he's now 12, he still gets excited when there's food around or the doorbell rings.

Aslan, being a young kitty, is hyper and curious about EVERYTHING and EVERYONE.  He's also a true flame point Siamese.  He's sneaky, too.

Piper, as the picture suggests, is a laid-back Norwegian forest cat who is easy to get along with and is playful.  He's a tad shy when folks visit he doesn't know, and they don't ever see him.  When he and Duke were kids, they used to play together incessantly.  Now, Duke still wants to play with him, but Piper doesn't seem inclined to do so.  Perhaps Duke's loud bark hurts his ears now?

In any case, I have two other fur grandbabies:  Tate, an orange tabby, and Joey, a silver Siamese.  They are equally sweet, but live in Arizona, so we don't see them often: 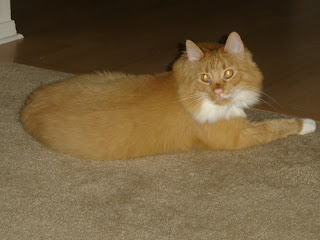 Tate loves everyone and is friendly and playful 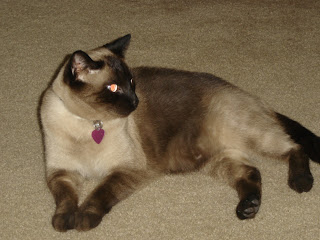 Joey is shy until he knows you, but he and Tate
are good buddies, playing and hoodwinking!
I haven't included a picture of Duke in this post because he is not a granddawg, but our baby :).  He rates a post all to himself, and he's had several in the past.  Perhaps it's time to take more pictures of his antics and post.  Will do it soon.
By the way, all of them are in THE DACHSHUND ESCAPADES series of books.  Tate and Joey are in Book 1, I AM SARGE; Duke and Piper come along in Book 2, I AM DACHSHUND; and Aslan makes his debut in Book 3﻿, DACHSHUNDS FOREVER, still awaiting publication.

Our grandchildren are just growing up so quickly, and all the grandparents I know say the same thing about their grandchildren.  We enjoy them so much, and I can be as silly as I want with them, at least until they hit middle school.  Then I'll have to behave like a proper grandma--but for now, I can be a clown, a monster, a foreign countess--what have you.
Love these wonderful kids!﻿ 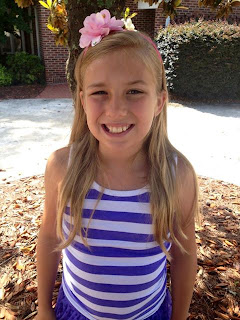 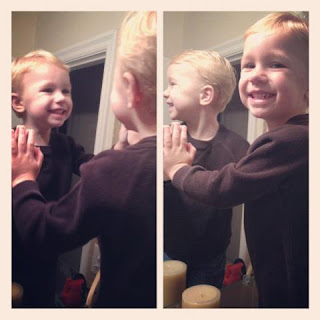 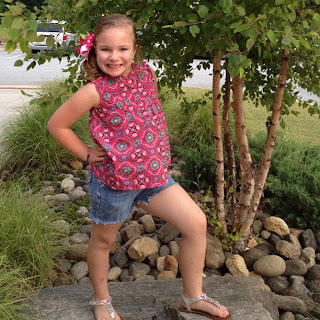 Alexa posing:  nobody coached her, either!