MELTDOWN: DUKE LIVES IN MY HEART 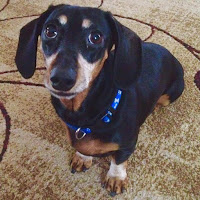 After our doxie Duke passed in July, I said I wouldn't write any more about his death. I had documented his last days and our struggle with not knowing how sick he was while in the veterinary hospital an hour away. Each day when we talked with the doctor there by phone, she kept reassuring us that he would be okay, that the meds would eventually work. When we finally got to see him after he'd been there for four or five days, we were shocked at how swollen he was. The meds WEREN'T working at all. They were merely pumping him full of further meds and blood transfusions, thus making it harder and harder for him to breathe. In fact, he was on oxygen, and they didn't even tell us!

I said all that to say this: after a few weeks, I was able to carry on without my constant doggie companion of ten years. The pain was excruciating, with those mental images of him that last time we saw him alive, lying there swollen, not even looking like our dog. He had weakly turned his head toward us, weakly wagged his tail in acknowledgment, and put his head back down because he had used up his strength. We had to make the decision to let him go, and did so the next afternoon. We were with him until his final breath.

Those terrible memories have been dormant in my mind; I had not allowed myself to dwell on them because I wanted to move on, to be at peace, to forget the pain of his loss. Great idea, right? Well, this morning as I checked Facebook, where I am in a number of doxie groups, I was attempting to find the words to console a lady who had just lost her doxie. In his picture, her dog looked so much like Duke! As I typed my words of comfort to her, all that pain and sorrow over Duke came roaring back: his agony at the end, our disbelief he had to go, the excruciating pain of loss. I found myself crying, surprising myself. It was supposed to get better by now--he died July 28, and it's been nearly five months.  And it has, for the most part. I've had moments of yearning to hold him in my lap, stroking his ears like I used to, but I'd quickly put that out of mind and turn to something else. But as you know, those of you who've lost a "soul pet," it isn't that simple. Much like the loss of a human family member, the grief over the loss of a very close pet companion cannot be timed. I couldn't decide that my grief was over, voila. So those moments of remembrance come roaring back without warning, and we just have to live through them. This was the first time since those first terrible weeks of loss that I actually lost it. Yes, I had a meltdown. I was home by myself (Clark substitute teaches most days), and Duke's memories were just too strong, so they manifested themselves by the tears flowing. Perhaps this was a cleansing moment--even now as I type this post a couple of hours later, I still feel the sadness of his loss. I know I'll be okay in time, but it isn't easy.

If you have experienced such a loss or are going through something like that right now, my heart goes out to you. It's not that I don't have a blessed life and a wonderful family. It's just that I'm missing a piece of my heart, and although I thought it had healed, apparently it hasn't done so fully. Duke was my furry friend who was far more than "just a dog." He was a fur child, a full-fledged family member, just like Shadow was to our daughter Holly and family.

Thanks for reading this far (if you have). I had to "get it out," and it has helped. We still don't want another dog and perhaps never will get one. I want Duke back. I want HIS companionship. I want HIS silly shenanigans. I want to play tug-of-war with HIM. My mind knows that's not possible, but my heart still wishes for his return--healthy, happy, and ready to be his sweet self again.

Good-by again, Duke. You were (and still are) one in a million who cannot ever be replaced. Your ten years with us brought such joy and fun. Thank you for that, and rest in peace. Love doesn't die just because you did.