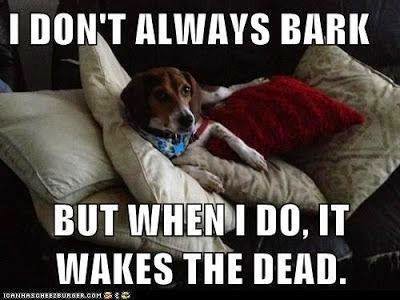 Yes.  Doxies do bark VERY loudly.  In fact, Duke lies in wait on Sunday afternoons, and the moment he thinks I've drifted off to sleep for my Sunday afternoon nap, BOOM!  He'll bark madly, thus waking me and causing me to think murderous thoughts about him. 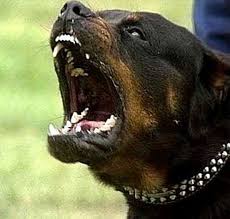 I don't know why dachshunds were endowed with such loud barking ability.  We recently took Duke and Shadow to the vet to get their toenails trimmed and have Duke's annual tests (remember, Shadow
is staying with us until next week).  In the waiting room was a HUGE dog, all black, and the owner had difficulty restraining him with his leash.  Clark thinks the dog was a rottweiler, but I'm not sure.  I think he was a mix--part rottweiler and part monster!  I'm so glad she was able to keep him restrained, however, because his bark sounded pretty serious, and he did not look friendly.

Being the feisty dachshunds that they are, both Duke and Shadow barked back at this dog who was probably five or six times their size, weighing about 100 pounds (Duke weighs 18 lb., and Shadow weighs about 12 lb.).

And you know what?  They were just as loud and reverberating as the big dog.  The rottweiler/monster's owner looked a bit surprised when she heard the "two pipsqueaks" bark, too.