Here I am holding Aslan, a one-month-old foundling kitten belonging to our daughter and her family.  Our son-in-law Philip found him beside the home of friends when he had checked on their cats while these friends were out of town.

Apparently, one of their cats found Aslan in the nearby woods and brought him up to the house, but nobody could find out where he came from or if he had siblings.  He appeared to be less than two weeks old, dehydrated, and flea infested.

So Philip brought him home, of course.  Holly bathed the pitiful little kitten, coaxed him to eat some kitty formula (yes, they do make such stuff) from a tiny bottle, and he now weighs one pound!  He's a feisty little fella already, too:  he will bite, swipe at, and pounce on anything he wishes, including feet, hands, dog or cat backs, much to the amazement of our grandchildren, who have been at the other end of that kitty's shenanigans!  He is still small enough to get inside one of my hubby's shoes as well.

He took a liking to lying around my neck like a purring fur collar--if I moved him to my lap, he climbed right back to lie on my neck again :).﻿

Piper, their adult cat, watches over Aslan like an indulgent uncle, never allowing Aslan out of his sight.  Shadow, their doxie, has even been seen licking Aslan, an unheard of action by this dog who has never interacted with Piper (it's been beneath his dignity to deal with a cat).  Our doxie Duke simply did not know what to make of the little bundle of white fur when we visited last weekend.

Times are a'changing in Philip and Holly's household!
Posted by Mavis Duke Hinton at 12:35:00 PM 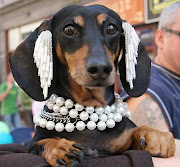