FROM DESSERT TO MASCARA: TIPS FOR COPING

Let's be honest:  sometimes we really don't like free advice--meaning that we didn't ask for someone else's opinion, but it was given, anyway.  Often, that breeds resentment.  However, once in a long while, good advice comes along, whether asked for or not, and it makes all the difference in our decision, situation, or action.  Below are some of the best examples of advice I've ever received:

1.  Writing:  "Just get the words down, then worry about mechanics and structure during the editing phase."  Oh, how that has freed me from constantly trying to find "just the right word" in context, etc.  Writing flows so much easier if one just gets those thoughts down.  I've often surprised myself by having to do little editing later.

2.  Loss:  "Don't try to think of what to say, because sometimes words won't help, anyway.  Just show up, show love, and BE THERE for hurting people."  We might be afraid of saying the wrong thing, so just say you are praying for them.  People appreciate the caring.  They probably won't remember what you said, anyway, but they'll remember that you were THERE when they needed you.

3.  Disappointment:  "Imagine yourself beyond this situation, going about daily living in a week or a month.  It's not really that bad, is it?"  You know, as simple as that sounds, the sun does come up the next day.  And sometimes, I have been so glad that things turned out differently than I first wanted!

The Bible speaks of those situations in life that are beyond our control.  As a Christian, I am to turn problems over to the Lord, allowing Him to work through me (and then not grab the problems back and try to keep handling everything myself!).  "Therefore do not worry about tomorrow, for tomorrow will worry about itself. Each day has enough trouble of its own."  (Matthew 6:34 NIV)

Besides, what can be changed by worry?  NOTHING.  We are only promised today, anyway, and although we are to plan for the future, we are not to fret over it.  If doing that, we are missing out on what today offers us.

4.  Feeling alone:  "Get out and do something for someone.  There are lonely widows who would welcome a cheery smile, a plate of freshly baked cookies or muffins, and some conversation."   And remember, it's not against any law to interact with someone much older or younger than you!

5.  Hemline:  "To quickly repair a hem that came loose, use masking tape.  It will hold all day until you get home and can sew it."  I know this one works, because it's happened to me while at work.  Nobody has time at work to sit down and sew a seam, even if you ARE the type who wouldn't be caught dead without your little sewing kit in your purse.

6.  Quick dessert:  "Buy a prepared graham cracker pie crust, fill with a can of chocolate pudding/pie filling.  Top with whipped topping and chocolate sprinkles, then pop into the fridge until needed."  Company's coming unexpectedly, and you need something FAST.  I'm talking about those pudding/pie fillings found in the baking aisle of the grocery store--there are other flavors and all kinds of variations:  use vanilla pudding/pie filling, top with cherry or blueberry pie filling, then just before serving, place a dollop of whipped topping.  Or, line a baking dish with vanilla wafers and sprinkle chocolate chips over them.  Place your favorite flavor of pudding over that, top with crushed cookies and chocolate chips.  Lastly, make pound cake "sandwiches" by filling two slices of pound cake (again, bought from the store) with nutella spread.  Yummy!

7.  Unsightly spot on blouse:  "Always keep a neutral scarf in a purse or desk drawer at work.  If you accidentally spill something on your blouse at lunch just before an important meeting, whip out the scarf and tie it attractively around your neck, strategically hiding the spot.  Voila!  Nobody will know."   I've done that, using a scarf clip to hold the scarf where I wanted it.

8.  Mistreatment:  We've all been mistreated in varying ways and degrees.  "Unless what happened to you was criminal and you must press charges, let it go.  It is not worth the anger, pain, and suffering on your part, because I can assure you that the other party is not suffering nearly as much!"  Letting go is much harder than it sounds, but it can be done by turning the hurt over to the Lord.  Many times, I've gotten up the next morning and the feeling or emotion was simply gone.  A couple of times I've even revisited the situation in my mind, but the difficulty was g.o.n.e.

9.  Sore throat:  "A couple of teaspoons of honey will soothe a sore throat, making it less scratchy.  An hour later, follow that with a cup of hot (as you can stand it) tea.  Repeat several times as needed."  Grandma's advice works best on the beginnings of a sore throat, not three days later when it is red and swollen.  By then, a doctor is probably in order. 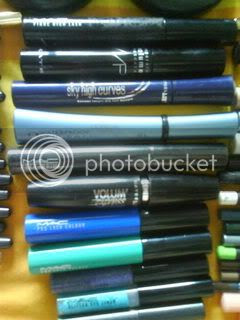 10. Mascara mishap:  "When applying mascara, and smudges get on your nose or under the eye, dab it away with a cotton swab dipped in liquid foundation."  I seem to get mascara under my eyes when applying it.  The cotton swab trick works quite well, and prevents disturbing my already-applied foundation.  A dab of facial powder over the spot seals the deal.

So--some bits of advice cover difficult situations, while others simply offer simply a quick fix. In any case, just "go with the flow" and try some of these when the occasion presents itself.  You might be surprised at how well they work for you.
Posted by Mavis Duke Hinton at 2:52:00 PM