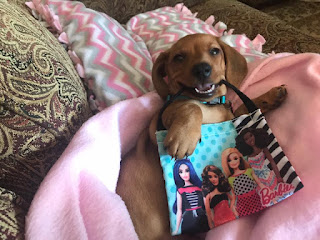 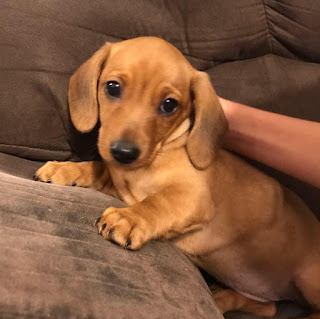 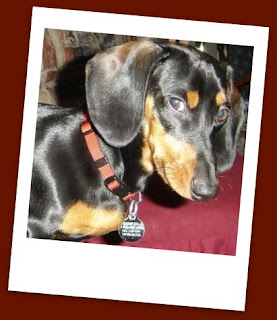 Today is our doxie Duke's tenth birthday! What a dawg . . . he's added so much fun and enjoyment to our lives. He came to us as a scared, eight-week-old puppy, but it didn't take him long to fit right in, stealing our hearts in the process. 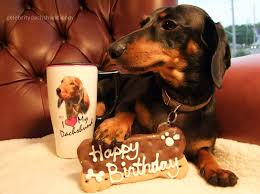 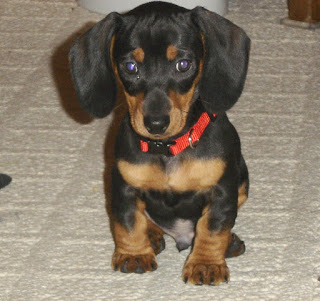 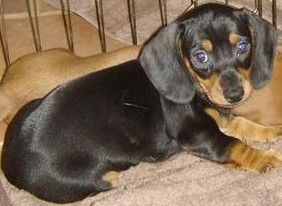 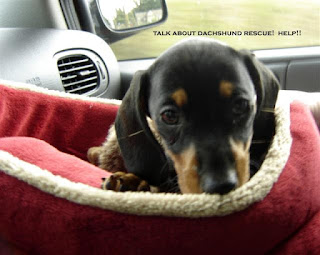 Since his older sisters are at camp this week, our grandson came home with us Sunday afternoon. We've already had lots of fun!  I took him to Catch Air, the local bouncy house extraordinaire; he and I went shopping, and he got a couple of new toys; we went out for lunch; we've played cards.

This afternoon, Papa is taking him swimming, then we'll all eat out somewhere and take in Despicable 3 at the movie theater. He returns home tomorrow so he can enjoy their new puppy Sunny ALL BY HIMSELF.

Are we spoiling him? Probably! But he's such a sweet child, it doesn't go to his head. He's always very appreciative of what we do for him, and he's a joy to be around. Oh--and he's VERY intelligent--just like your kids and grandkids, right?

Duke is always thrilled to see Asher, his play buddy. They've played down on the floor quite a bit already.

Our cute doxie granddawg Sunny joined our daughter Holly's family on Saturday, and we got to meet her Sunday afternoon, Father's Day. Well, she has all of us wrapped around her tiny, soft paw already!
She turned eight weeks old on Saturday, she has big, expressive eyes and a cute bark--and is feisty.

We didn't know how her boxer "brother" Bruno would take to her--but she handled him with ease. She was on the couch and she thought he got too close, (he merely laid his head on the edge of the couch cushion), and she growled at him! Bruno jumped back. One dawg down.

Then, we wondered how Duke would receive her, since he's the only "baby" in our house. He was fine, too. He wagged his tail at her, and they did touch noses a few times, but they seemed to think "this is the way it is," and went on with the day.

Below are some photos of the day:


Never fear--I'll be posting plenty of photos of Sunny from now on. A Facebook friend said she "stole the show."

That's right--they watch every bite we put into our mouths, hoping for a bite we'll share with them.

Our doxie Duke makes me laugh every single day--several times. From his facial expressions, body language, comical actions--he makes life so much fun.

How about you? Does your doxie make your life fun? Let us know in the comments below!
Posted by Mavis Duke Hinton at 8:00:00 AM No comments:

It sure is! Just look:

How can anyone resist such cuties, I ask!

Our grandchildren were with us last week, and boy, did we have a blast! They went swimming in one of our county's local pools, went shopping, visited our library for reading material, watched some old movies on Netflix, and of course, visited Stone Mountain Park.

We had a wonderful time with them. Duke was extremely happy they were here, too, and was sad when they left.

They're coming back Sunday afternoon for Father's Day--and are bringing their new puppy, Sunny! Never fear--we will take photos and share them here.

Dachshunds are quite adaptable, don't you agree? You gotta love 'em.
Posted by Mavis Duke Hinton at 8:00:00 AM No comments:

We all make jokes about how much doxies love to eat, but since their noses are about 100,000 times more powerful than ours, it's no wonder that food smells so good to them! When they smell spaghetti sauce, they smell each ingredient separately--so they know if we've forgotten the basil, the garlic--what have you.

Here are some prime examples of what I think dachshunds are thinking when they see or smell food: