HAVE DACHSHUND, WILL TRAVEL

Doxies (most of them) love to travel with their humans. I've often wondered why many hotels/motels won't allow dogs (or pets)--dogs we've owned made far fewer messes than kids do! Oh well.

Have a great weekend, doxie lovers!

Dachshunds . . . you gotta love 'em, for their honesty,

DOXIES REALLY KNOW HOW TO RELAX

Yes, today is that kind of day for me. We've had a lot going on in our neck of the woods, so if I had a doxie, this is what I'd be doing!

What are your plans for today (you may have already done them). In any case, happy Saturday and weekend, doxie lovers!

It's Monday AGAIN?? Well, I'm thankful for another week, aren't you? Of course, I'm retired, so that helps a bunch.

These doxies don't really care for Monday, either: 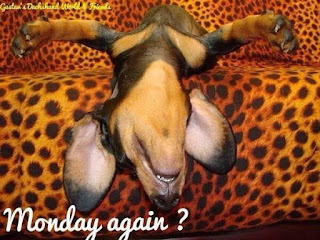 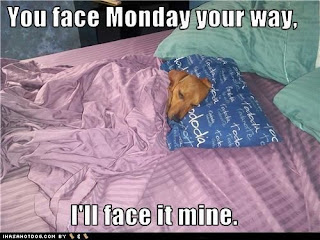 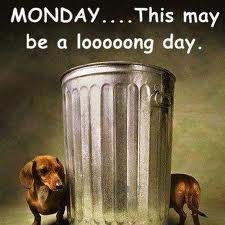 In any case, there's lots to be thankful for, but I needed an excuse to use these hiliarious doxie memes!

Since I don't blog on most weekends, I'll say HAPPY ST. PATRICK'S DAY to you today: 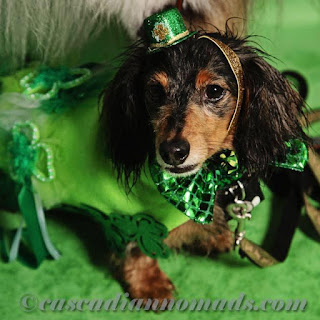 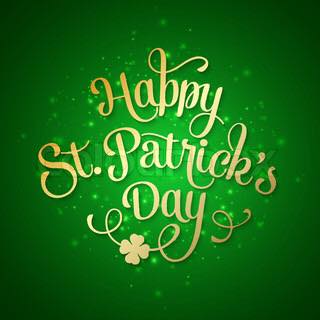 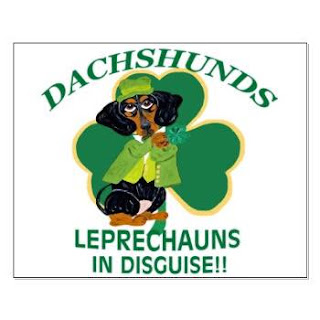 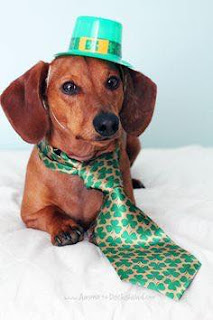 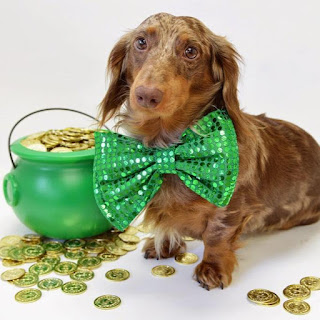 Oh, and have a great weekend, too!

I took a little break from blogging, but I'm b-a-a-a-ck!

Here's granddawg Sunny enjoying the Georgia weather (in the 70s) on their screened-in porch:

HOW MANY STALKERS DO YOU HAVE??

It's a well-known trait of doxies that they hate being alone, so they follow their humans around the house. Of course, part of that is their hope of obtaining some yummy human food, but not totally--they simply want to be where we are. I'm fine with that, and that's one reason I still miss my Duke--he always had to be in the same room with me if Clark was working (he subs in the local county schools several days a week since he retired from teaching--I know, it's a busman's holiday, right?).

Their penchant for companionship includes following us into the bathroom, and Duke always did that, too. You just get used to it after awhile. Moms of toddlers know exactly what that's like, since she hardly ever gets any time to herself, including calls of nature!

Aaaaand, since today's Friday, I'm sure you're looking forward to the weekend as most of us are. Have a great one, enjoy time with your doxie(s), and relax--you deserve it!

Remember how much fun birthday parties were when we were children? We woke up on the morning of our birthdays with great anticipation, hardly able to contain our excitement about the fact that it was, in fact, our birthday party day!!  Now, of course, maybe I want to do away with birthdays altogether, lol. No . . . I'm thankful for my long life and all the blessings I have from the Lord, and the greatest on this earth is my family.

Last Saturday we a attended our grandson's 9th birthday party, and he had requested that his mom do a Marvel-themed party. Anyone who's cool knows that Marvel means Captain America, Iron Man, Thor, etc. So, our daughter Holly set to work to create the perfect cake for him. He's a sweetie, so I'll let these pictures do the talking:


What is more important than going to a grandson's birthday? NOTHING. We enjoyed being there, and they played Pin the Shield on Captain America (like Pin the Tail on the Donkey in ancient times when I was a child), and since the weather was cooperating, played outside. They also watched Iron Man movie on TV.

JUST HOW SMART IS YOUR DOXIE?

There are tons of doxie memes around, with many of them focusing on the intelligence of dachshunds. Any doxie owner/lover KNOWS how smart they are, especially when it comes to getting their way or trying to get our human food for their own consumption. But how smart are they, really?

At home, the Dachshund's playful nature comes out. He loves to be close to you and "help" you do things like tie your shoes. Because of his intelligence, he often has his own ideas about what the rules are when it comes to playtime-and those rules may not be the same as yours or even other breeds of dogs. Dachshunds are known for being lively and enjoy chasing other small animals, birds, and toys. The breed standard — a written description of how the Dachshund should look and act — probably describes their personality best, saying "the Dachshund is clever, lively, and courageous to the point of rashness, persevering in above and below ground work, with all the senses well-developed. Any display of shyness is a serious fault."
Dachshunds have soulful eyes and complex facial expressions. Their lungs are large for a dog this size and they have a barrel-like chest. Because of these things, Dachshunds have a loud, deep bark that sounds as though it comes from a much larger dog. And they do like to bark, which is something you might consider if you have neighbors who could be annoyed rather than amused by the antics of your brave little Dachshund.
Dachshunds often bond closely with a single person. They may even become jealous of their owner's attention and can, if not properly trained and socialized, become snappy.
Smooth Dachshunds are the most popular variety in the United States. Their coats are short and shiny and need little grooming. They do, however, need a sweater in the winter if you live in an area with cold weather. Common colors are red, cream, black and tan, black and cream, chocolate and tan, blue and tan, and Isabella (fawn) and tan. Dachshunds also can have patterns in their coats, such as dapple (a mottled coat pattern), brindle, sable, and piebald.
Longhaired Dachshunds have sleek, slightly wavy hair and can be the same colors as the Smooth Dachshund. They should be brushed every day to prevent mats from forming, especially around their elbows and ears. Many believe that the Longhaired Dachshund has a more docile temperament than the Smooth or Wirehair.
Wirehaired Dachshunds have wiry, short, thick, rough coats with bushy eyebrows and a beard. Like Smooth Dachshunds, they often are mischievous. They won't need a sweater in the winter, but they do need to be brushed regularly to prevent mats from forming. Their coat colors can be the same as the Smooth Dachshund, but the most popular colors in the United States are wild boar (a mixture of black, brown, and gray), black and tan, and various shades of red.
Dachshunds often have been seen as a symbol of Germany. Because of this association, Dachshunds lost popularity in the United States during World War I and World War II. Their appeal was too great for this to resist, however, and they quickly made a comeback in popularity. Because of the association with Germany, a Dachshund named Waldi was chosen to be the first official mascot for the 1972 Summer Olympics.
Dachshunds are a good choice for apartment dwellers and people who don't have a backyard. They are popular with urban dwellers because of their small size and ease of care. They generally are active indoors and also enjoy going on walks. Just be careful not to let them get too fat or allow them to injure their backs by jumping off furniture. Also, be sure to support their backs when you are holding them. Because of their long backs, they are susceptible to slipped or ruptured (herniated) disks in their backs, which can result in partial or full paralysis.
Read more at https://dogtime.com/dog-breeds/dachshund#We6HvXsFErG4dhwp.99
Posted by Mavis Duke Hinton at 7:00:00 AM 1 comment: